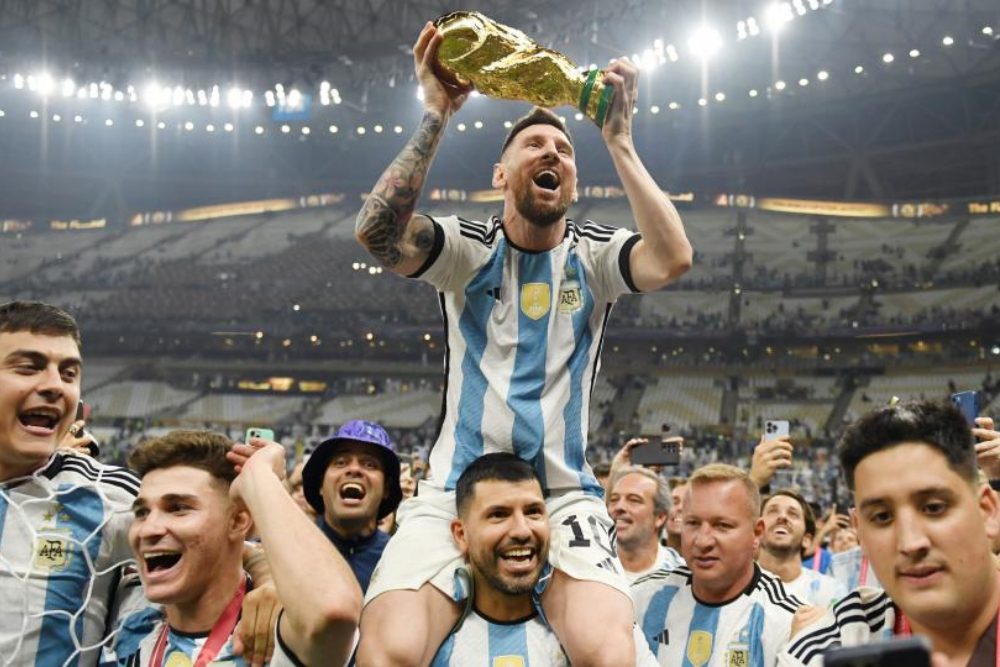 Whether it’s the final act of a play, the last episode of a TV show, or the last game of a career, I have a soft spot for the emotional power of a finale. Endings simultaneously mark the end of a chapter and remind us that life happens in stages, and we are always changing and growing.

Over the past few weeks Argentina marched to the World Cup title, led by Lionel Messi, one of the greatest soccer players of all time. Messi had achieved almost everything a player could hope for in his career, but one thing had eluded him: winning the World Cup for his home country. Despite his incredible talent, he had experienced several disappointing exits in previous tournaments.

Heading into this year’s World Cup, Messi declared that the tournament would be his last representing Argentina, setting up his finale on the international stage.

When Argentina suffered a shocking loss to Saudi Arabia in its first match, many feared Messi would once again suffer an early exit in the World Cup. But that embarrassing opening defeat turned out to be Argentina’s first, last and only loss of the World Cup. From there, Messi appeared to carry the team on his back through the rest of the tournament and received the Golden Ball award as the World Cup’s most outstanding player.

Messi saved his finest performance for the Final, when Argentina faced off with France in one of the most exciting World Cup matches ever played. Despite losing a 2-0 lead in the second half, and then a 3-2 lead with just a few minutes left to play, Argentina ultimately emerged victorious as Messi scored three goals.

As I watched Messi’s performance, I couldn’t help but make the following observations, which offer broader leadership implications:

Overcoming Setbacks: Messi and Argentina did not allow their loss to Saudi Arabia to derail them; instead, Messi acknowledged that the loss was a catalyst for the team’s subsequent winning performances. What separates winners from losers is often how they move forward from setbacks, not the setbacks themselves.

Learning To Adapt: As a 35-year-old veteran who played the entire final match—90 minutes of regulation, plus an additional 30 minutes of extra time—Messi seemed to recognize that he needed to adapt his game to the situation and pick his spots to give maximum effort. He didn’t try to do everything himself but saved his energy for the right moments. It can be hard to acknowledge when our skills are declining and we need to adapt, but the ones who achieve enduring success know how to do just that.

Running Through The Tape: Messi’s performance was a great reminder that we all have more in reserve than we believe. It is always more fulfilling in life to run through the tape of whatever race we are running, rather than to let up before the finish line.

Knowing When To Walk Away: Most of us dream of going out on top, but we fail to accept that doing so often means walking away while we’re still performing at a very high level, before our declining skills or interest drags us down. Knowing how important good endings are to our memories and happiness, we need to recognize that there’s often more to lose than gain by pressing on after we’ve reached the summit and attained a potential storybook ending.

I have seen this time and time again, not only with athletes, but also with people across all areas of life. It’s not surprising that even Messi now seems to be considering making another run with the national team; however, it’s hard to imagine how his international career could have a better ending than the one he’s currently poised to achieve. If we replace the memory of a perfect ending with a more regrettable one, it may be the mental equivalent of taping a re-run over your most-prized video, as those of us from the video cassette era have experienced before.

Most of us will never get the chance to engineer a storybook ending on the global stage like Messi can here. But throughout our lives, we will likely face many decisions about when it’s time to move on to the next chapter, and how we want the last chapter to end. Do we want to go out on top, or will we choose to risk having that decision taken out of our hands? These are important considerations that can shape the trajectory of our lives and careers.

“If you want a happy ending, that depends, of course, on where you stop your story.”