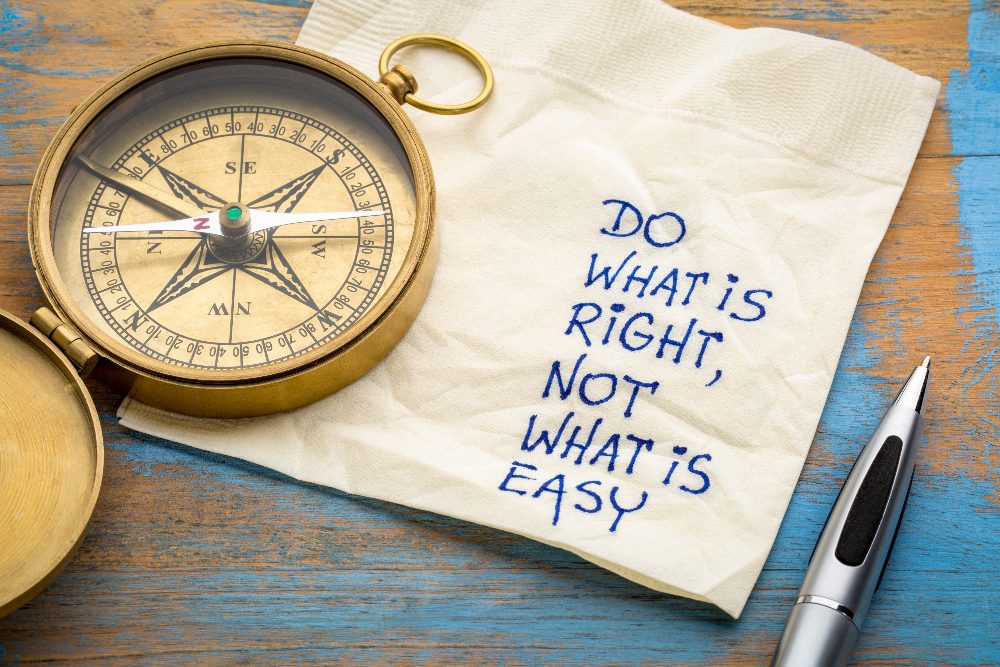 One of the best things any person or organization can do is make important decisions in alignment with their core values. In fact, a clear test of a value is when you are willing to make a values-based decision that causes temporary discomfort, or does not serve you well in the short-term.

A core value should remain constant. If you are willing to go against a value as circumstances change, or in the face of pain or pressure, then it’s not really a value.

In the past few weeks, I saw two opposite examples of how values played into corporate and political decision-making.

The first was the announcement that Andreessen Horowitz (a16z), one of the best known and most founder-friendly venture capital firms, is staking a $350M investment in a new business called Flow. You may not be familiar with Flow, but you’ll quite possibly know its founder: WeWork’s Adam Neumann.

The rise and fall of WeWork has been well-documented lately, especially in the WeCrashed podcast and in the recent Apple series of the same name, which I watched this summer.

Before watching WeCrashed, I’d only had tangential knowledge of WeWork’s checkered history. The series was a shocking exploration of the inner workings of the company, which grew exponentially to become the largest office rental business in the world under Neumann’s leadership. But WeWork’s incredible topline growth was equally matched by the firm’s mushrooming losses. In 2018, for example, WeWork reported $1.6 billion in losses against $1.8 billion in revenue.

But WeWork’s woes weren’t just financial. Neumann personified almost every stereotype of a Silicon Valley bro-culture’s cultish leader—the kind who gets too much power too fast and is rarely held accountable for bad behavior. WeCrashed specifically highlighted the toxic nature of the company’s culture. Frequent partying in the offices, poor corporate governance, financial self-dealing and the silencing of dissenters were hallmarks, and WeWork even drew allegations of sexual harassment in its workplace.

From a brand and values perspective, it feels like a miss for a16z to back an unrepentant founder with such a questionable leadership history. After all, a16z’s own website states as a value, “we do only first class business and only in a first class way.” First class was not how anyone described Neumann’s behavior or leadership at WeWork.

Similarly, a16z co-founder Ben Horowitz recently released a bestselling book titled What You Do Is Who You Are. I loved Horowitz’s first book, The Hard Thing About Hard Things, and I think he’s spot on with the title of this one.

Not surprisingly, the decision has been met with some harsh criticism, especially from women founders and entrepreneurs from diverse backgrounds. While Neumann is a passionate and persuasive visionary, it’s hard not to wonder whether the potential return is condoning Neumann’s past narcissistic behavior—behavior that it’s unclear he regrets—and apparent lack of integrity. It’s also natural to consider what message a16z’s choice signals to future entrepreneurs looking for a venture partner.

A story that depicts the other side of the values coin is that of Liz Cheney, a member of the US House of Representatives from Wyoming. Cheney is the daughter of former Vice President Dick Cheney and a lifelong conservative. She was also one of the few Republican members of Congress to vote to impeach Donald Trump following the January 6th attacks and a member of the January 6th Committee that investigated the event.

Cheney has been unafraid to criticize members of her own party this past year, strongly condemning election deniers in particular. In one of her most poignant quotes when speaking on behalf of the January 6th committee, she shared: “Tonight, I say this to my Republican colleagues who are defending the indefensible: There will come a day when Donald Trump is gone, but your dishonor will remain.”

As expected, Cheney faced immediate political consequences for her principled stand. In choosing to go against the majority position of her own party, she became a frequent target of attacks and criticism. Most recently, Cheney paid the ultimate price: she lost her seat in Congress in the Republican primary after winning 73 percent of the primary vote in 2020.

Cheney’s actions are extraordinary, regardless of political ideology. It’s exceedingly rare to see a politician willing to put their values over politics, with the full knowledge it would likely cost her a job she loves. Conversely, it’s exceptionally common for politicians on both sides of the aisle to shamelessly shape-shift their viewpoints and compromise integrity specifically to stay in power. Cheney may have lost her job, but she will sleep with a clear conscience.

“If you do not value your values, no one else will.”