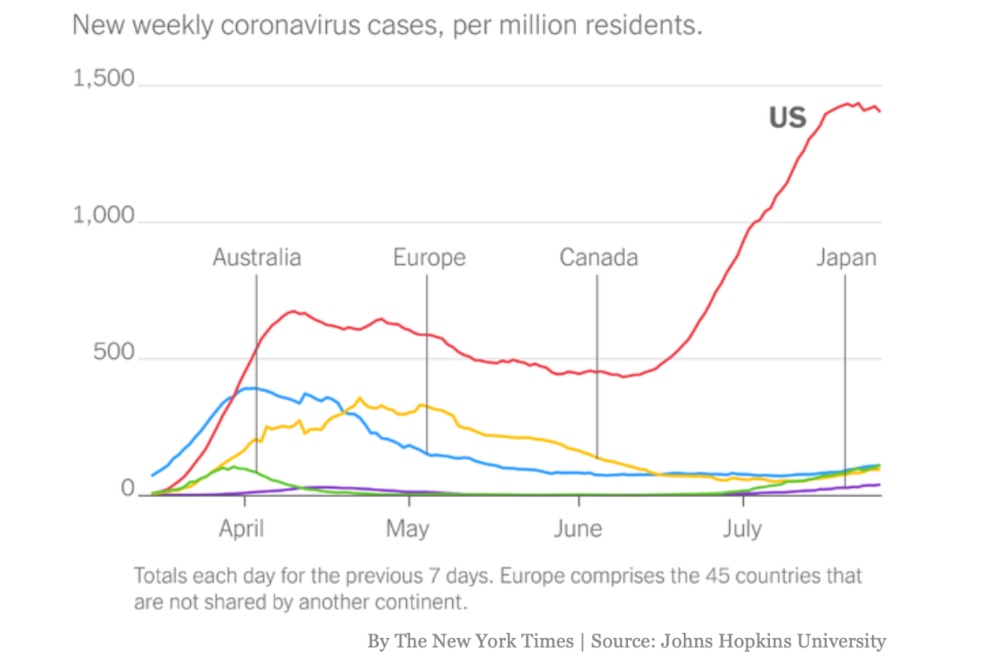 When the history books are written, the COVID-19 outbreak in the United States will be viewed as one of the most tragic leadership failures in modern history. Leaders at all levels of American government have failed dramatically, a reality made obvious with one glaring statistic: the US has only four percent of the world’s population, but 25 percent of its COVID-19 cases.

Intelligence and talent are more domain-specific than we believe. Just because someone is brilliant at one thing—such as giving a stirring speech, or running an effective campaign—does not assure they are brilliant at another. In fact, having success in one area often creates overconfidence in areas beyond our expertise—creating risky blind spots. You wouldn’t want your surgeon to manage your money, or let a financial advisor take out your appendix.

For all their strengths in other areas, our leaders have failed in their pivotal responsibility to manage this pandemic. Here are four critical mistakes:

Popularity is fickle. Exemplary leaders understand this and are willing to endure short-term criticism to achieve longer-term objectives. They often make unpopular, principle-based decisions to achieve the best possible outcome.

By contrast, many state governors caved to public pressure and criticism about lockdowns, choosing to ignore public health recommendations and reopen too much, too soon. Those same leaders are now seeing their approval ratings hit historic lows, as cases in their states reach record levels. Meanwhile, those who ignored the initial criticism and followed the guidelines are seeing record levels of support as the efficacy of those approaches show results.

Failing to learn from history

Perhaps the bleakest error of the pandemic is the refusal of many to learn from history. The 1918 Spanish Flu epidemic offered relevant learnings for today’s crisis, yet few leaders have studied history’s key lessons.

As the pandemic spread through the United States in 1918, two cities’ leaders took radically different approaches. Philadelphia was slow to implement non-pharmaceutical initiatives (NPI) to stem the pandemic—social distancing, business closure, mask use—and experienced a surge in cases following a large parade that went forward at the beginning of the outbreak. St. Louis, by contrast, canceled a similar parade and implemented aggressive NPIs soon after the first cases were reported. In the end, Philadelphia had among the highest case and mortality rates of any American city, and St. Louis had among the lowest.

Analysis of the Spanish Flu Pandemic showed that cities that put NPIs in place faster or took more aggressive action had lower mortality rates, and fewer total cases; their economies also all recovered much faster. During our current pandemic, while many leaders who pushed to reopen rallied others by emphasizing a need to prioritize the economy, those same leaders are seeing a second hit to their economies as the virus has spiked, and those regions will likely see a slower fiscal recovery.

Very few politicians have experience in epidemiology or pandemic history, yet many of them continue to believe they are smarter than the people who do. Medical experts aren’t always right, or always in agreement, but they should not be benched simply because a leader finds reality and science politically inconvenient.

Virtually every single country or state that has gotten the virus under control has done so with a similar playbook and has deferred to health experts when shaping policy and strategy. This includes Taiwan, which, despite having 24 million citizens, suffered only 451 COVID-19 cases and seven deaths. Taiwan developed its playbook for COVID-19 based on learnings from the SARS outbreak in 2013, and the country’s response is being led by professionals who have trained for it for years, rather than politicians.

Being unwilling to adapt

One of the hallmarks of great leaders is a willingness to change course when they were proven wrong or new information becomes available. Early in the pandemic, when the virus was not well understood, New York Governor Andrew Cuomo realized he made two critical mistakes: not closing businesses sooner, and sending sick patients who were not critical back to nursing homes. Cuomo admitted these mistakes and has demonstrated a willingness to change policy regularly.

Despite suffering enormous losses early in the pandemic, New York is now one of the few US states where the virus is under control. Other leaders have been unwilling to acknowledge their mistakes or change strategy, even in the face of disastrous results. This includes Florida governor Ron DeSantis, who just weeks ago was running victory laps. The state of Florida now has over 450,000 total cases, putting it ahead of all but five countries globally.

COVID-19 is a devastating and rare global medical crisis. However, the bigger story is the repeated leadership failures that have exacerbated the short- and long-term damage.

The only solace of these four failures of leadership is that they may serve as a powerful teaching moment in history for future generations of leaders to learn from as they face similar and increasingly daunting global challenges.

“Those who fail to learn from history are condemned to repeat it.”