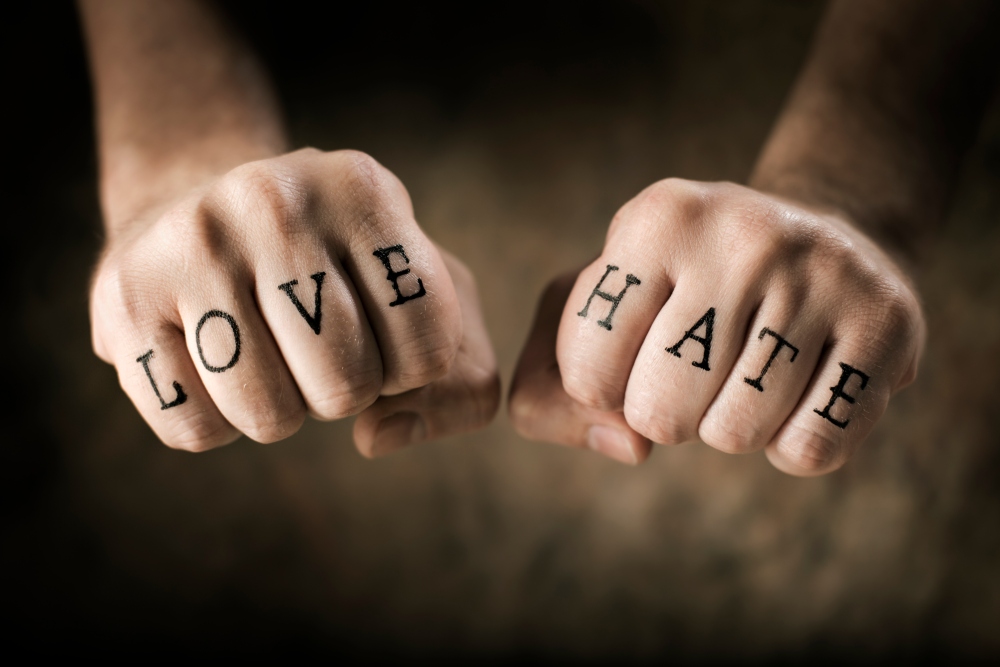 In 1991, Michael Weisser, along with his wife Julie and three of their five children, moved from New York City to Lincoln, Nebraska for Weisser’s new position: Cantor and spiritual leader of South Street Temple.

As they were moving in and unpacking, the phone rang. When they answered, the caller said, “You’re going to be sorry you moved in, Jew boy” and then hung up.

A few days later, the Weissers received a package in the mail containing hateful and racist materials along with a business card from the Ku Klux Klan (a white supremacy hate group) that read “the KKK is watching you scum.”

The police suggested that the caller and antagonist was very likely Larry Trapp, the local Grand Dragon of the KKK chapter in Nebraska. Trapp, as it happens, was also a double amputee, having lost his legs to advanced diabetes at a young age.

Weisser was worried for his family but decided to take a different approach. He got Trapp’s phone number from a friend and began leaving messages on his answering machine, such as:

“Larry, there’s a lot of love out there. You’re not getting any of it. Don’t you want some?”

“Larry, you’d better think about all this hatred that you are involved in because you’re going to have to deal with God one day.”

“Larry, the very first laws that the Nazis passed were against people like yourself, who have physical disabilities, and you would have been among those to die under the Nazis. Why do you love the Nazis so much?”

This turned into a regular monthly routine, with Weisser calling and leaving a message for Trapp at 3:00pm every Thursday. One Thursday, Trapp answered the call by screaming profanities and asking Weisser what he wanted.  Weisser replied that he knew Trapp was disabled and offered to give him a ride to the grocery store, to which Trapp responded that he was all set and told him not to call anymore.

But Weisser kept calling and leaving messages of love. Then, one day, Weisser’s phone rang. It was Trapp, who asked, “Is this the Rabbi?” When Weisser affirmed that it was, Trapp responded by saying, “I want to get out of what I am doing and I don’t know how.”

Despite warnings from his family, Weisser decided to visit Trapp at his house that night to “break bread,” but not before calling a friend and telling him to call the police if he did not hear from him by midnight.

Weisser thought he had made a grave mistake when Trapp answered the door in his wheelchair with three guns in his lap. Then, Trapp reached out his hand, introduced himself and burst into tears.

After talking for hours, Weisser learned of the severe emotional and physical abuse Trapp had suffered at the hands of his father. As a child, he would often hide for hours to avoid a beating. It became clear to Weisser that Trapp’s hateful actions were a manifestation of having never felt loved.

Over the next year, Trapp became a fixture in the community, making amends and talking to groups about the perils of hatred. Around this time, his health also began to deteriorate. Surprising everyone, the Weissers invited Trapp to come live with them, an offer he accepted. Trapp stayed with them until his death a year later. During this time, he also converted to Judaism. The day of his funeral, the synagogue was packed with people who would have never expected to be there just a few years before.

I have many takeaways from this story, but here are a few that stand out the most:

To hear more of this story in Rabbi Weisser’s own words, you can listen to this incredible podcast episode that we listened to with our children, or read this article.

“The truth is, human nature is good, not bad.”