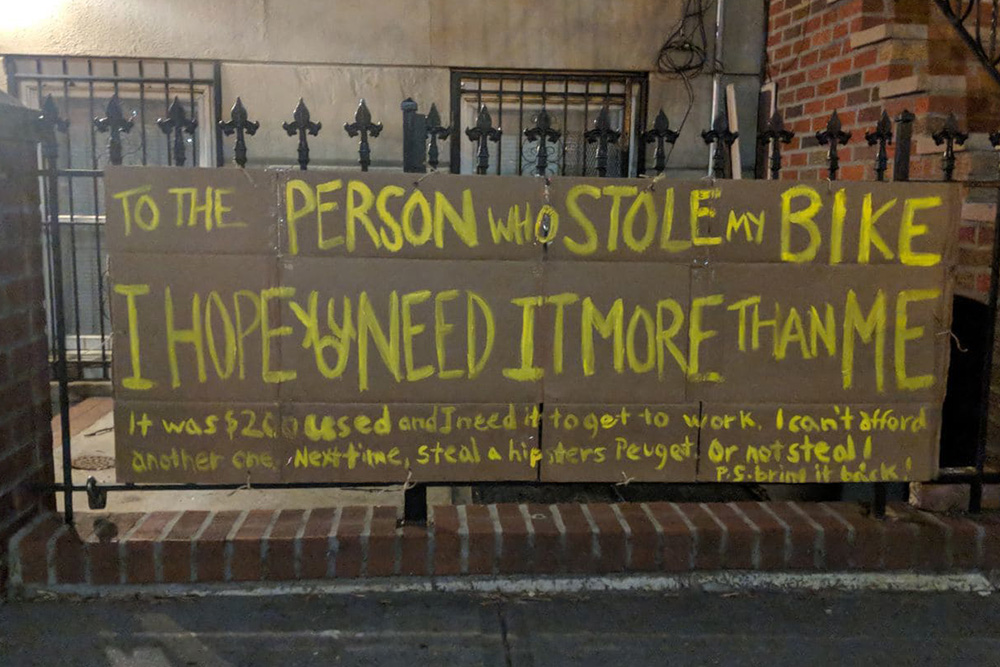 Amanda Needham was pissed and she wanted it to be known.

A thief had stolen her bike from outside her house in Brooklyn, leaving behind only a tire and the lock. Her bike was her only transportation to work.

In her anger, Amanda created an 8-x-3-foot cardboard sign and hung it outside her house. It read:

“To the person who stole my bicycle, I hope you need it more than I do. It was $200 used and I need it to get to work. I can’t afford another one. Next time steal a hipster’s Peugeot. Or not steal. PS Bring it back.” 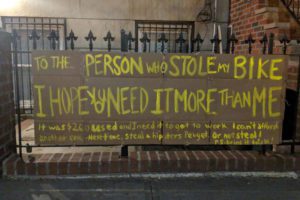 Three days later, two young men rang her doorbell. With them was a blue mountain bike sized for a teenager. One of them, Michael, had his bike stolen as well and was moved by her sign. Since he was not using this bike anymore, he offered it to her for free. Even though it was too small for her, she graciously accepted because she saw that they really wanted to help.

A few days after that, her bell rang again and it was a woman at the door. She asked Amanda if there was any way she could help or anything she could do for her.  Amanda explained that she had recently signed up for Citi Bike (bike share) so she now had transportation, but they shared a laugh about the Peugeot comment and hugged before saying goodbye.

At this point, Amanda’s husband wanted her to take down the sign, but to Amanda, it was no longer about the bike.

Soon, her buzzer rang again. This time she was greeted by a man who explained that he was an art dealer and had heard of her situation from an Instagram conversation about it. He liked her sign and offered to buy it for $200 dollars. She accepted.

Touched by all the gestures, Amanda took the bike that Michael had given her to a local bike shop to get serviced so she could donate it to someone in need. In exchange for doing the repair work, Amanda got the bike shop set up on Instagram and Twitter so they could share the story.

The one thing that Amanda wanted most from this whole experience was acknowledgement. She wanted people to recognize, reach out and support each other, something she felt humanity is lacking these days.

Not only was she heard, her story and message really inspired the best in others. Here are a few lessons we can all learn from Amanda’s story:

You can read the full story about #KarmaCycle in Amanda’s own words.

In the meantime … let’s remember to acknowledge each other, even if it’s just to provide an encouraging word, give a hug or listen when someone is going through a rough time. At the very least, it’s good karma.

“Remember there’s no such thing as a small act of kindness. Every act creates a ripple with no logical end.”