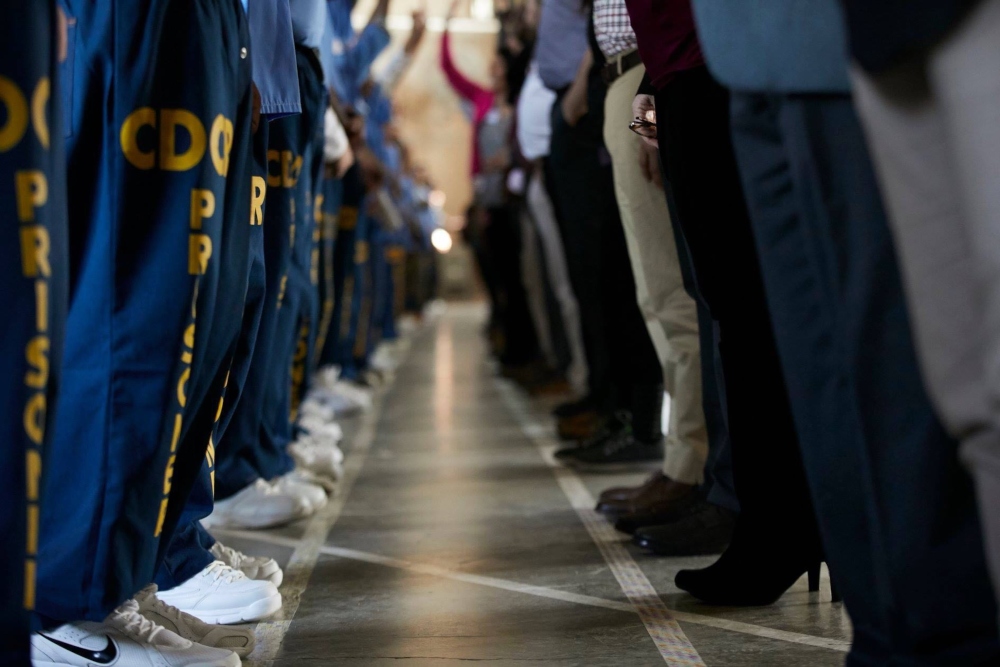 “We don’t fire warning shots, so if you hear gunfire, get down and against the wall.”

Up until the Warden at Kern Valley State Prison in Delano, CA spoke these words, I had been feeling relatively comfortable about my visit to the maximum-security prison. His statements, however, quickly snapped me and the 50 or so other entrepreneurs in my group back to reality.

Our group of volunteers had traveled to Kern as part of Hustle 2.0, the brainchild of Cat Hoke. Hoke has spent almost two decades trying to reform the U.S. prison system and improve recidivism rates by teaching life and business skills to inmates to better their future.

After being guided through a series of armed checkpoints, our group entered the gymnasium area where we would be spending the day with the inmates, many of whom are serving life sentences and aren’t even eligible for parole.

When we entered, music was blaring. To our profound surprise, we were welcomed by the inmates with a tunnel of high-fives as if taking the field at the Super Bowl. Shortly after sitting down for introductions, we were asked to get up and “bear hug” twenty inmates for three seconds each in less than a minute. This act of personal connection immediately lowered any walls or barriers that our mind or body had built up.

Over the next few hours, we were paired up with inmates for one-to-one exercises. We listened to their life stories and plans for the future, coached them on their business ideas and helped them prepare for interviews if and when they got out of prison. For a bit of levity, we also had a lip-sync contest.

This incredibly powerful and emotional day shifted my perspectives and taught me many important lessons. I’ll address the first three in this week’s post and cover the final three next week.

1. Culture is Powerful.  I write a lot about the power of culture in business, but it wasn’t until my visit to Kern that I truly realized just how powerful culture can be. If a program like Hustle 2.0 can completely change the mindset, perspectives and behavior of a group of the most “dangerous” inmates, even creating a positive sub-culture within the prison, then cultural change within any organization is possible. While rules have their time and place, culture and values are profoundly stronger when it comes to creating a set of normalized behaviors and an intentional community.

2. Life is an Uneven Playing Field. Intuitively, I know this, but this realization became so much more evident as story after story unfolded in my discussions with these inmates. One gentleman I spoke with during an exercise on forgiveness shared that his father had tried to kill him when he was seven years old. He also shared that he had not had a visitor in three years; this day was the first time he had felt seen/heard since he could remember.

Another shared that his mother was killed when he was six and that his father went to jail for 20 years when he was seven, at which point he spent ten brutal years in the foster system. He was a brilliant artist with a great attitude and a bright future, but without a support structure or positive influence in his life, he got caught up with the wrong crowd and lost his way.

3. I Need to Judge Less & Seek Understanding More. For one of the exercises, we all lined up along a taped line across from an inmate. We were then asked questions about our lives and childhoods, stepping forward if the answer was true for us or backward from the line if it wasn’t. Very clear patterns quickly emerged.

The vast majority of the inmates we met were also first arrested before age 15 and many were sentenced to 20+ years or life before they were even 18.

This is where compassion and understanding are critical. One’s history and context contribute significantly to their reality. It’s so easy to judge a person or their situation in the present tense (i.e. this person is guilty for taking a life) without understanding what came before it.

“Any fool can criticize, complain, and condemn—and most fools do. But it takes character and self-control to be understanding and forgiving.”