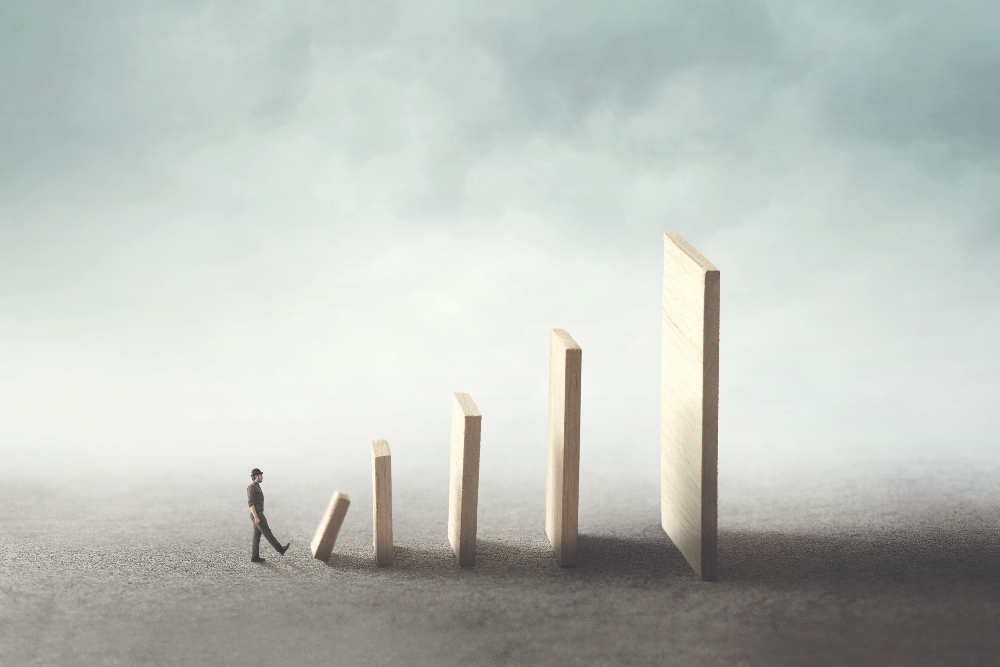 This is the time of year when many people set New Year’s resolutions. I’m personally not a big believer in setting resolutions, a perspective that is often confirmed when I compare the number of cars parked in front of the nearest gym at the beginning of January versus the end of February.

Real change doesn’t happen overnight. It requires a lot of intention, small steps and discipline. In fact, the more radical an attempt is to change behavior or habits, the more likely it is to fail. Creating a new habit takes at least 30-60 days to stick.

However, the beginning of year is a great time to reset and recalibrate goals; and science supports this. A study conducted by Gail Matthews found that people with written goals are 39% more likely to hit them. What’s more is that if they send their progress to friends for accountability, they are 76.7% more likely to reach them. Those are meaningful numbers.

Before setting your goals this year, you might want to visualize a domino. When lined up in a chain, the momentum of each domino falling can knock over another domino, even one that is 50% bigger. This ”domino effect” compounds quickly, so much so that if positioned correctly, it would only take 29 dominos to knock down the Empire State building.

So, why I am I talking about dominos? Because this concept was inspired by a book I read over break called, The ONE Thing by Gary Keller and Jay Papasan. After reading it, I am making some changes to my goal-setting.

This year, I am only picking four goals, which is a huge reduction from past years. Everything else that I would normally set as a goal is now a tactic (domino) to achieve one of my “ONE thing” goals. These sub-goals or dominos are the means, not the end.

For example, I have a 2019 goal to achieve a measurable improvement in both fitness and focus. Things that would have been goals in previous years are now steps for me to achieve that goal, which is what is most important.

Last year I set a goal to run a half marathon, but I also had an opportunity to bike from London to Paris. Unfortunately, I couldn’t do both. Rather than feeling like I did not accomplish a goal, I should have realized both were tactics to reach the same end goal: improved discipline and health. So that’s my real focus and I now know what I need to get there.

Another goal is related to my second book, Elevate, which comes out on October 1st. My “ONE Thing” goal is to hit the New York Times bestseller list. To support this goal, I have identified 15 dominos I need to topple for that to become a reality. Next to each domino, I have also written the name of the person or people who can help me get there.

As the year progresses, I may find other or better ways to meet the goal and I’ll simply swap out the tactics. But, for now, I am focused on the how.  And here is where the concept of alignment really comes into play. Each of these four goals support each other. For example, to reach my goal of making the New York Times bestseller list with Elevate, I will need to maximize my focus and energy.

What’s more is that because each of my One Thing goals are aligned with one or more of my core values and/or long-term goals, I will have knocked over an even bigger domino when I complete it.

If you are looking for success this year, here is the winning formula:

If you need some help getting started, try using my whole life dashboard.

“A goal without a plan is just a wish.”